Benjamin is young. He came late on the first day. I, Christy, wasn't sure if he was really serious about the training we were hosting to lead audio Bible studies in the Nyankpa language.
Day two, though, I saw he was committed to being there, had learned the questions by heart, and was ready to thoughtfully think about questions given to him.
Day three, the participants went out to share what they had learned in the community by doing what we had taught them to do, play the audio Bible and then ask a series of questions without teaching or preaching.

Later in the day, we met in groups to discuss who they felt God wanted them to start a group with and why.  Benjamin was in my group.  When I asked him who he wanted to start with he said, "the old people in my neighborhood and their old neighbors."  I asked, "Why do you want to go to the old people?"  He said, "Today, after our first Bible study, I wanted to do another one because we had more time.  I went into one compound and there was an old woman there.  I asked her if I could share with her.  She said yes.  When she heard, she was so happy.  She said, "I have been going to church and not understanding the Hausa they are using, but today, I have heard God's Word.  Will you come back and share with me again?" I want to go back to her."

Pray that Benjamin and the other 26 people who received this training and went away with the audio Scriptures will be faithful to go and do what they planned and feel called to do.
Pray that the Word will be truly heard and touch many hearts in Nyankpa land.  Benjamin was one of three groups who went to old people.  Every group reported that the listeners said the same thing, "I have been hearing and not understanding, until today."  Oh, may they hear and understand, and fall in love with Jesus! 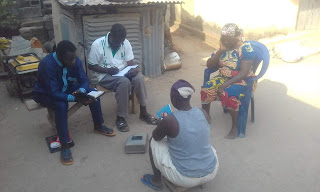 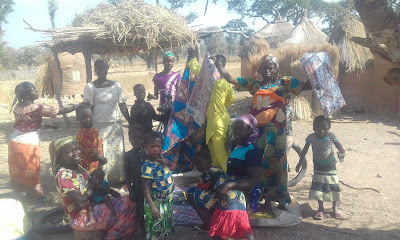 I thought I was just taking a picture.  I asked permission, got the permission and snapped a picture of a man selling cloth to women.   Some of the women held up the cloth for me to snap it.  It was a quick shot of normal everyday life.  End of story?

Then a Nigerian colleague who is spending a year with these people took another picture using the seller’s own phone.  When I saw the picture on his phone I thought it was quite strange.  He had cut out the people buying and selling and even the cloth completely.   All you could see was me with the man.  Was it a mistake?  When I expressed my surprise at how close the picture was, he explained.  “In this culture, men and women have a gap.”

I realized it was true.  I only saw men sitting with men, and women at the borehole with women.  In another interview someone told me that a man and his wife don’t even share finances with each other.  Traditionally, they hardly even spend time with each other.
By Zach - January 29, 2019 No comments:

Email ThisBlogThis!Share to TwitterShare to FacebookShare to Pinterest
Labels: OneStory

Tomorrow, Sunday, we travel to a village first by road (to the river), then by motorcycle to worship with a good friend in his community church.  This is a first with our children, so please pray with us as we go!

Please pray that the participants will come every day and be inspired and motivated to begin their own audio Bible studies.  Pray that God's Word in their language touches their hearts in new ways and bears fruit!

Please pray that Zach, Mariama, and Lydia will enjoy sweet times together in the village and make new friends and special memories during the training time! 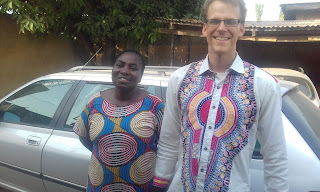 A teacher of many, both village children and the children of her colleagues. A light in several fields. Speaks French and studied German in Togo. Considered crazy for being 'Born again' and even crazier for living far from home. Escaped death in many exciting and some sad adventures. Laughs and cries, trusts God and presses on.

Last week she was just a contact in my phone. Now, after spending eight hours driving together, Sister Uche is an inspiring colleague.
By Christy - January 17, 2019 1 comment:

Email ThisBlogThis!Share to TwitterShare to FacebookShare to Pinterest
Labels: OneStory 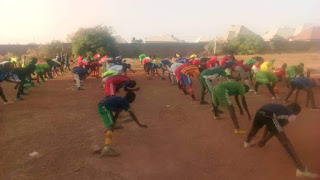 I, Christy, looked around at four men representing those who have dug deeply and presented to God their time, energy, love, and ability for the young people of our community through the "New Year, New Life Football Tournament" during our debrief today.  Testimonies of how God worked at this four day camp in His grace and through their sacrifice kept coming. 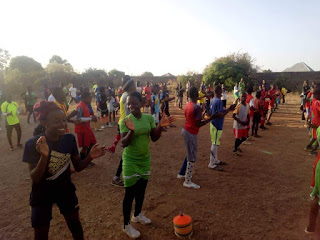 "This camp was not just for the kids, it was for me.  I learned how to control my temper, and it is something I'm carrying with me into this year," one of them humbly stated. They shared the comment of one participant who has been addicted to and selling drugs, "This is the first time in three years I've had three square meals a day." This guy's friend said, "I'm going to stop doing drugs when I get back home."  One mother calls Coach Adams every day since the camp saying her son has changed and thanking him for what he did before the son takes the phone from his mother and says, "Coach!  When are we going back to camp?"
The Coach from Sports Friends International said, "I knew it was a success when no one wanted to go home." Another coach added, "The guys who I thought didn't want to be there, who showed no sign of enjoyment, on the last night were begging me for another week.  They want to keep training with me." Still another said, "I was amazed how these athletes from different backgrounds were contributing during devotions.  It was really great how they were really touched!"

As I see the participants in the community, I ask them, "How was camp?" Their broad smiles say more than their words do.  Their highlights include the movies (Queen of Katwe and Facing the Giants), exercising to music, learning new songs, and the food.  One camper responded when I asked him what he learned, "I learned to encourage my friends when they fall down and help them get back up." Another girl said, "We learned to exercise to music.  On the last day we were all just dancing!" 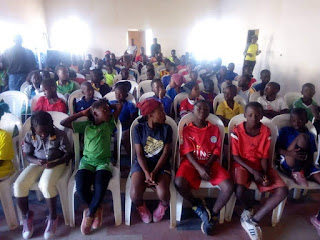 We praise God for his VICTORY!  He has shown himself so faithful, redeeming and multiplying the small effort we were able to put in.  He brought the busses, coaches, sound equipment, finances, Sports Friends, venue, and athletes.  He gave immense measures of grace, patience, and strength on the part of everyone contributing!  Seven young people gave their lives to Christ and many more recommitted themselves.
Pray for these young athletes.  Pray that the enemy would not steal what has been planted, and that God will send more people to invest in their lives and disciple them!  Pray for what we are supposed to do with the interest and relationships that have been developed!  Pray that the coaches that invested their time will get better trained to disciples these young athletes to love Christ and find their victory in him.
By Christy - January 10, 2019 No comments: 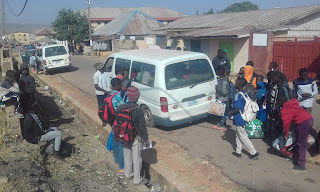 We prayed for coaches, we got four,
Two with legs and two with doors,
The two ladies will coach the girls teams,
The buses worked well, it seems.
All this happened, no work of mine,
God has his way, he has his time!
More answers to prayer coming, I'm sure,
As in prayer for these kids we endure!

Day one of camp down, three to go,
As the testimonies come, I'll let you know! 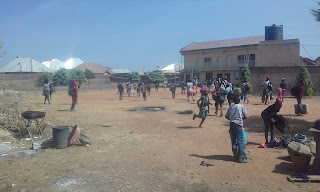 Thursday, the 27th and Saturday the 29th proved to be more than I could handle, but I know God was not daunted by the 150 rambunctious athletes, gangs wandering by and through the field, the late start, people arguing about who was to play next, and the sun beating down in the dry heat. 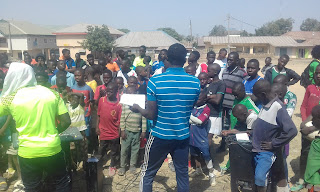 From the beginning of this tournament in late November until now, we've seen the hand of God in many ways.  Coaches showed up to train and disciple kids. God provided financially through a company in the US for 60 kids to go to camp with their winning team.  He provided the speaker system from the church.  He also provided Adams, who was willing to invest his time and resources in organizing, and Sports Friends International who will run the camp for the winners. God has done it, shown himself strong in our weakness, and we praise him for it!

Please Pray! We still do not have transportation for the 100 athletes going to camp tomorrow, Wednesday, the 2nd of January.
Please Pray!  That the children from different backgrounds will find Christ at camp, and be agents of change in their communities.
Please Pray!  That the coaches who attend with the athletes will be vigilant and wise, and that God will protect the participants spiritually, physically, and emotionally as they are at the camp from January 2nd-January 5th.  I am looking for a female footballer to accompany the girls.
Please Pray! For Sports Friends International as they disciple these young people to follow Christ.
By Christy - January 01, 2019 No comments:

After flying to Lagos on Monday, our family went to the beach on Tuesday morning.   I bustled around from child to child getting off clothes... 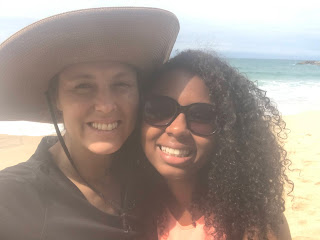