I needed to go for a walk, to breath, even if it was the muggy Indiana summer air. I stopped to gaze at a dragonfly. It felt as though it was the first time I'd ever gazed upon one. We looked at each other long enough for my breath to slow and mind to clear, caught in that moment, fixed in time. As the dragonfly took flight, in the quiet that had settled over my heart as I gazed on this perfect creation--bulgy eyes inches from my own, incandescent blue lips reflecting the light--I was able to hear the gurgling stream behind me. I heard the swell of the cicadas, the many different birdsongs in the trees all around, and the words, ‘Il est toujours soeur le trone’ (He is still on the throne) that swept over my heart as I gazed up at the dancing leaves of the tree tunnel over this rural Indiana road. Those words that were spoken in greeting to those working in the kitchen by my Cameroonian mother, Maman Gado when she swept into the communal kitchen of the office compound in Cameroon.

The defeated enemy wants to destroy the confidence we have in our God who sits on the throne. He’s not like Yertle the Turtle in Dr. Seuss' book who was “king of all he could see” on his stone throne over the Salamasond pond, but the King who sees every dragonfly and every heart in every land hungering for him! He sees the sacrifices we each make to bring his love closer to the hurting, longing to join him in his redemptive work. I believe he rejoices in our heart work, as small as it seems, with the never-ending labor of planting, watering, weeding, fertilizing this vast harvest that HE is growing (1 Cor.3:6) for his glory! He says, “don’t grow weary!” (Gal. 6:9) “I am making all things new!" (Rev.21:5)
He also invites me and you to listen as he "delights over you with singing" (Zeph 3:17). I imagined the dragonfly seeing my face over and over with it's thousands of lenses in his tiny compound eyes. What information was he processing about my frazzled hair and tired eyes? I imagined God seeing me over and over, and the unchangable truth that runs through his mind every time my face appears before him is delight and joy because of Jesus! What an impossibly beautiful thought! My flawed being, living out my life like a vapor in the wind, is treasured by the Creator and when he sees me over and over he never gets tired of me! He never wishes I was any different in the fabric of my being than the beautiful one he created. This is so incomprehensible to me for I get tired of myself daily! He is making all things new, including me, but not to destroy and recreate a different person altogether, but to renew in relationship with him. Why would he want that? Why do I matter so much to him? The Psalmist asked the same thing in Psalm 8, and then says, "you created him...and crowned him with glory and honour." This doesn't explain extravagant love, it just adds to the wonder and mystery of the heart of God, the King of the dragonfly, and the King of my heart who becons me to his throne gazing into the eyes of a dragonfly under rustling Indiana archways.
By Christy - August 03, 2020 No comments: 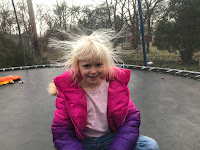