If this wasn't part of a blog series, I'd have named it, "Leave me alone!"

The dessert was delicious, and the company even sweeter so I continued going to the Wycliffe recruiter's house when they offered their dessert nights throughout my college years.  Ed and Linda were relentless in their acceptance of me as I was openly hostile to the thought of joining Wycliffe, a giant in the world of missions. I was looking for an organization where I could know everyone and that was more....homey.  Despite my resolve, the stories of God's Word impacting individuals and language groups that others had overlooked, well, my eye humidity levels were always really high on these special nights.

I started a full time Spanish teaching job in Holland, MI the year after I graduated from college.  After they said I was hired (as I walked out of the office), I drove down the street with my window open shouting at Centennial park and all the stupefied bystanders, "Somebody wants me!" I had told those interviewing me that I didn't want the job but my mom wanted me to stay closer to home, and I did believe in what they were trying to do so I was applying. Ok, so I might have teared up when I told them that Latino kids needed to be able to converse with their grandparents...it's true! But I think all of us in that room felt like we had been drawn together for that moment.  So, there I was, a five year position having been offered, full benefits, and in the most beautiful city in the country (I may be biased)!

I went to SIFAT (see previous post) over the summer to be a camp counselor, telling Sarah Corson's stories in first person because she wasn't able to join us in person. I couldn't believe the weight of them, the burden that landed heavily on my heart every single time I told the stories I had heard as a girl on that same campus.

There was this one student from Cameroon, Pastor Fimba, and every week he would stand up and invite the youth to come to Cameroon and help meet the needs of his country.  I always nodded, looking around the room as I prayed for those young people to accept the call.  Then, one night, a question struck my heart as I peered around sagely, hoping to see at least one camper who was visibly moved..."What about you?" "What about me?" I countered. "I speak Spanish, and I don't even know where Cameroon is!" (Funny I had never looked that up after hearing Pastor Fimba week after week.)  None the less, I knew I needed to be open if I expected others to be, so I told Pastor Fimba after the talk that night that I thought I was supposed to some day go to his country.  He nodded and smiled, and moved on...as did I.

Back to Michigan I felt surprisingly happy in Holland.  I had asked God every semester in college if it was time for me to quit college and move overseas yet, and I kept feeling like I needed to see that thing through.  So, I stayed. Got my degree in teaching, and felt really, really ready to go.  But I had found a group of kids I could pour myself into in my Holland Public students, and I had realized mission was at my doorstep.  Toward the end of the year, I told God he better make me uncomfortable or I might just stay in America.  The next week the administration sat me down and said they were cutting the size of the program and I was the one to take the hit. I was going to be part time, lose my benefits (I had just had a very expensive knee surgery which was totally covered), and be moved to Kindergarten from 4-5th grade (a curriculum which we had written throughout the year) the following year.

I thanked them and went felt thankfully uncomfortable.  I went home to call around to see where they needed me overseas.  I started with SIFAT's contacts in Ecuador but the mission school I had visited was no where in their records, like it had vanished into the jungle.  Because Ed and Linda wouldn't leave me alone, I had been told about 1,872 times at dessert nights and over bagels and chai tea in scenic downtown Holland that Wycliffe needed missionary kid teachers, I called Wycliffe.  I told them I didn't want to teach in an MK school, I wanted to be itinerant, living in a village, and did they have a position like that open?" Pretty sure it all came out in one sentence because I wasn't psyched about my resolve having crumbled so easily.  The person on the other end said, "Our biggest needs are in Mozambique and Cameroon."  A pause. "I'll take the position in Cameroon." I'm sure she said something else, but I checked out on details.  Somehow I started the application process, told the school that I wasn't going to return the following year, saw God provide financially through his body, and in 6 months, I was in Cameroon. In my first month I made it to the Northwest to visit a surprised Reverend Fimba and stay with his family for a week during my orientation to the country he invited me to.

I remember that God calls us generally and specifically.  He calls us to be his.  He calls us to surrender.  He calls us to trust that his grace is sufficient and his love is unconditional.  He calls us to make disciples. All of us. Then there is the "good works that he planned in advance for us to do," (Eph 2:10) that I believe are specific to our giftings and the desires he plants in our deepest being.  I was called to those kids in Holland for that year.  I was called to Cameroon that night at SIFAT. I was quite literally called into that administration building so my calling to Cameroon could be confirmed.  I remember that God chose me not because I was fit for it but because he delighted to do so, and it delighted me to accept.  Not only did he call me, but I remember that he gave me a heart for the young ones he called me to in Cameroon.

I think I'll leave that remembering for another post.

I hate missing the train!  Today I missed the train. I had planned a day in Chicago with a dear friend I met 10 years ago, also a new bride ... 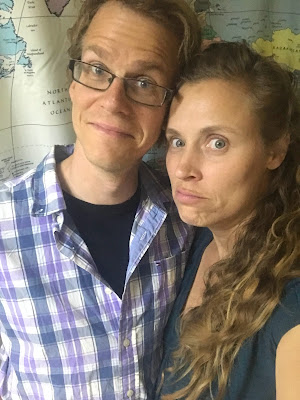