The Cheifs, Taxi drivers, and Children

"Why do we share what's happening on the field?"  I asked the regional managers of a large Nigerian mission organization yesterday.  "For God's glory and for the growth of the church," was my anthem.

I shared with them:

"People ask, "Why do we remain in Nigeria?"
For that taxi driver who finally got the audio Scriptures in his language and shared it with everyone around.
For that chief who kept telling the Nigerian missionary living in his village, "Maybe I'll believe in Jesus tomorrow," but years later when visited again by that missionary had forgotten the missionary who had learned his language.  The missionary turned to my husband and said, "When will tomorrow come for him...when will it come for his people?"
For the children who run to greet me and carry my bag to the church, sitting expectantly to hear the Word of God and sing, "Let the children come to me," and "The Word of God is powerful and active..." and "This is my son whom I have chosen, listen to him." That they would come, know his powerful Word, and listen to him. 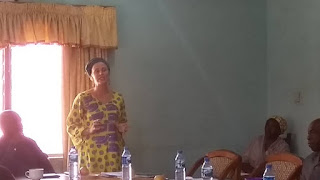 We remain in Nigeria for all of the taxi drivers who keep the country moving, chiefs who can lead their people to the cross, and children who tomorrow will stand for Christ...that they may hear and know and respond to God's sweet gospel of love."

The managers applauded, and were then challenged to prepare four modules for our training in January.
Following the short training, the participants gathered around to find their language on the SIL language map and discuss dialectical variations in their languages. Animatedly, they explained the different names used by speakers of their language.

This sweet connection gives yet another answer to the question "Why do you remain in Nigeria?"  Thank you for praying.
By Christy - December 16, 2018 6 comments: