They Just Looked At Me

It isn't usually the highlight when a group of kids "just looks at you" when you ask them a question, but here Zach was telling me it was the best part of his trip with our church.  Why?

Well, we've been working with a different organization, imploring them to consider translating children's materials into languages other than Hausa and English.  They serve a very big denomination in the area with children's Sunday school curriculum. We had asked them to take a trip with us to a village so we could see the need together.

So Zach told me this story: Here he was, after telling a group of children a Bible story in Hausa on this trip, with other Hausa speaking adults around listening, and the children just stared at him blankly.  The mothers standing behind the children translated Zach's questions into Berom (their own language).  Then they told them the answers in Berom.  The children repeated the answer back to the mothers who in turn told Zach the answer in Hausa. The children couldn't understand or speak Hausa.

Now I knew why these children's blank stares was the most interesting part of his trip.  It wasn't that they "just looked at him" that made him happy, it was the evidence we were looking for in those blank stares to address a very real need. Then Zach continued his story...

"There is a Bible in Berom," he informed them and the mothers standing there said, "We know, we have one!"  They went inside and returned with a New Testament published in 1970 (now the whole Bible is available in Berom).  He asked one of the mothers to read a different story, and then ask the children some questions.  It didn't go perfectly well because she was feeding them answers, (a totally different Scripture engagement issue) but they were more interactive and seemed to understand better.

I had even more clarity as to why this was such a great discovery, the mother was excited that she had the Bible, and she could read it! Distribution and literacy are two BIG things that hinder Scripture use.
I'm telling you all this today because tomorrow, Zach, me (Christy), and the administrative secretary (who is already in favor of translating it into multiple languages) from this other organization are traveling to that same village to visit a Sunday school class and talk with some children in the area.

Please Pray that we will be able to find someone to tell a story in Berom well, who can ask questions to the children and wait for their answers.
Pray that after seeing the situation, the evidence will be strong enough to warrant other board members who aren't yet convinced to travel with us to other areas for more research in early May.
Pray that blank stares will turn into joyful, knowing, bright eyes when children are asked what a passage means. Oh that they may know the God who loves them and speaks to their hearts!
By Christy - April 13, 2019 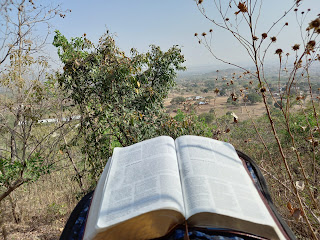